Interoperability can be defined as “the capacity to openly share information across multiple networked blockchains” [4] such that users are easily able to interact with one another even though they use different protocols to agree within their local blockchains. In this section, we will review the current interoperability modes in the market, how they work, and their limitations.

The biggest problems with centralized exchanges are that they:

• require users to trust a centralized entity, which is a security risk and runs

• counter to the idea of decentralization

• need escrow accounts on all the supported chains. This requires that the exchange holds tokens on each chain for liquidity. The token capacity limits performance. There are also security issues involved in holding the tokens.

• provide convenience at the expense of security. Exchanges only support transaction events. It’s not possible to build multi-chain dApps on top of centralized exchanges.

Decentralized Exchange (DEX, bridge): As an alternative to centralized exchanges, many decentralized exchanges were born, such as Anyswap, THOR chain, etc. Cross-chains also fall in this category. These projects generally use a new chain for consensus and transfer the assets on the source chain to the destination chain through a series of mappings. They are also classified as relay chains. The disadvantage here is that there are many more transaction steps and intermediate tokens are generated. This solution is not concise enough. The problems listed in Vitalik’s article are mainly for cross-chains [13]. Unlike centralized exchanges, there is no need to trust a single entity, but the issues of needing to hold escrow accounts on all supported chains and only supporting transaction events still exist.

Blockchain Networks: Cosmos and Polkadot use relay chains for inter-chain communication. They are designed with inter-chain interaction in mind, and therefore many changes have been made in the design of the blockchain platform. Interaction among chains is easier if it is done within this ecosystem, 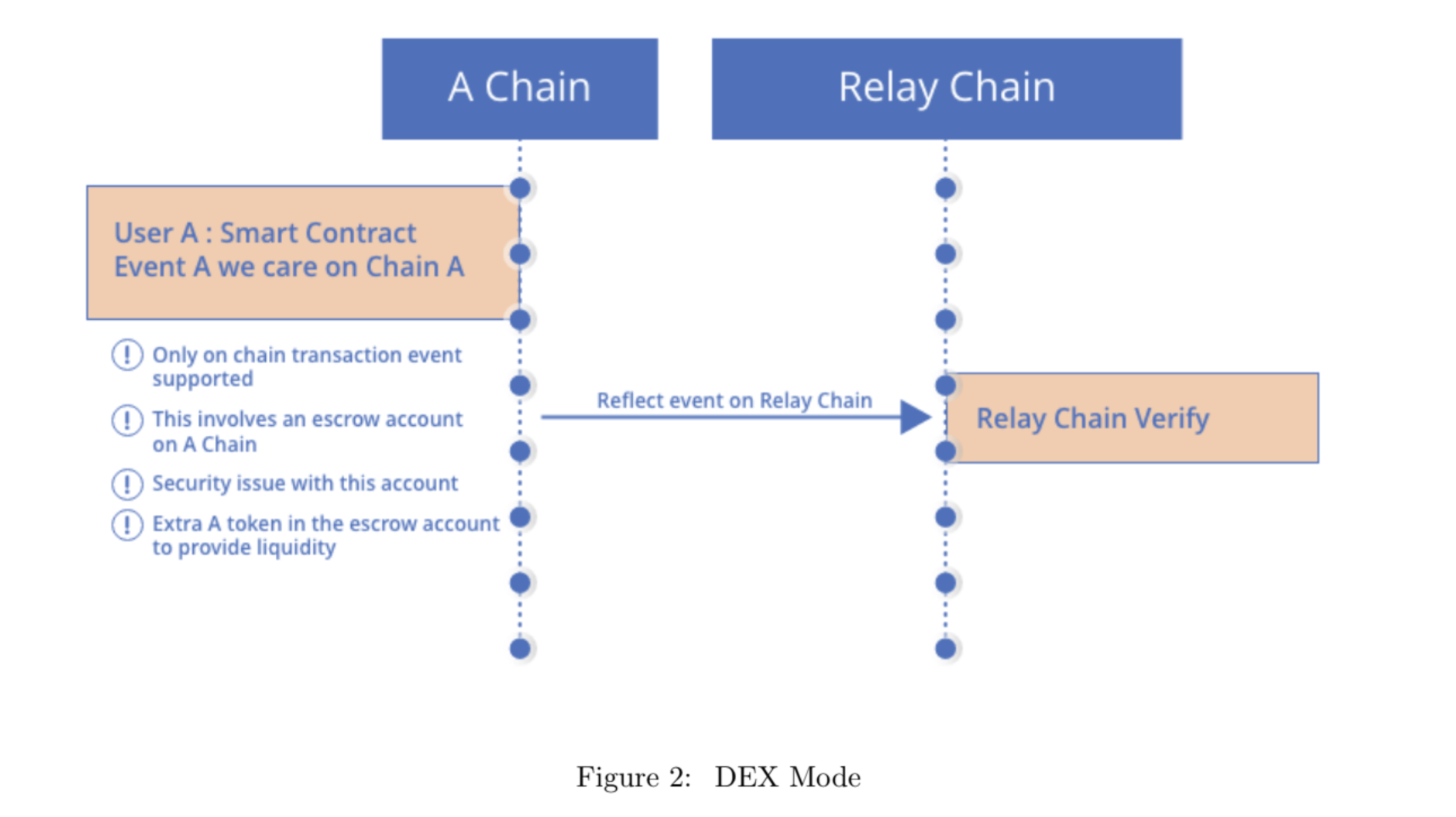 but it remains very difficult to interact with other chains, for instance, between Cosmos and Polkadot themselves.

LayerZero proposes the “trustless” concept, which ostensibly does not require dependencies, but in fact depends on the integrity of the oracle machine and the relayer. Oracles are currently not in common use, making them inconvenient to work with if developers want to add special processes. Relayers, meanwhile, are single-point servers that can be easily hacked. LayerZero also requires the transmission of the whole state, which is a large amount of data and results in higher transaction fees.

Axelar proposes the concept of CGP and CTP, analogous to the gateway layer, routing layer, ap plication layer, etc. in computer network protocols. A decentralized network is used for consensus, and threshold signatures are used for state transmission. This scheme, like LayerZero, requires the transmission of the state. The inter-chain operation is performed by the node instead of the user, which is a complicated scheme, and in the case of large transaction volume, may result in unexpected security problems. By and large, LayerZero and Axelar support transaction events only; in most cases, the transactions even have to originate from an address they assign. It is dicult, if not impossible, to build a general purpose dApp on top of such frameworks. 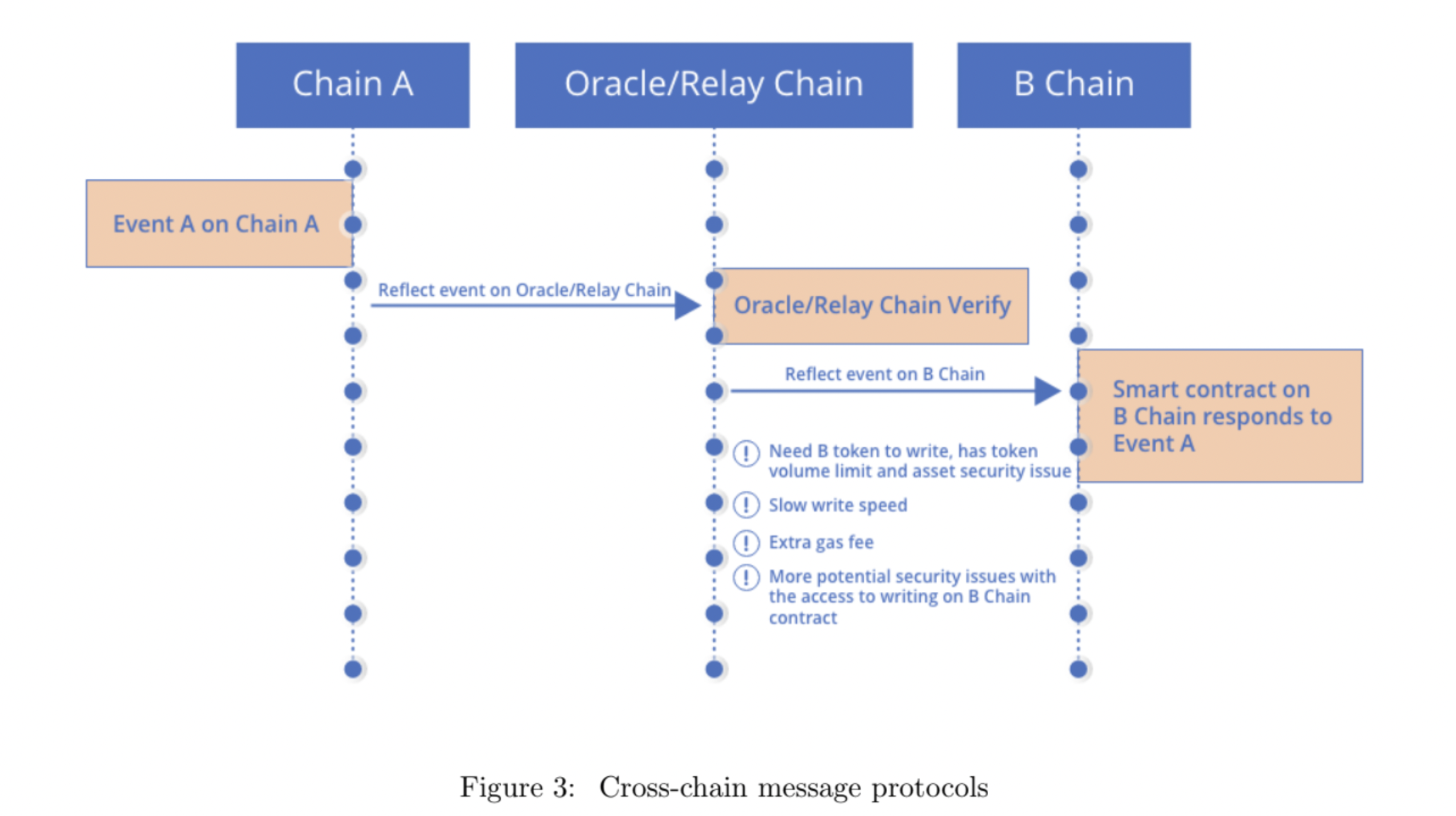 Updated 27 May 2022
Did this page help you?
Yes
No
UP NEXT
Blockchain, cross-chain, and multi-chain
Docs powered by archbee